A dialogue on compassion between a friend and I. Edited to make me look better. And him worse.

1988 was the year I quit the Republican Party. 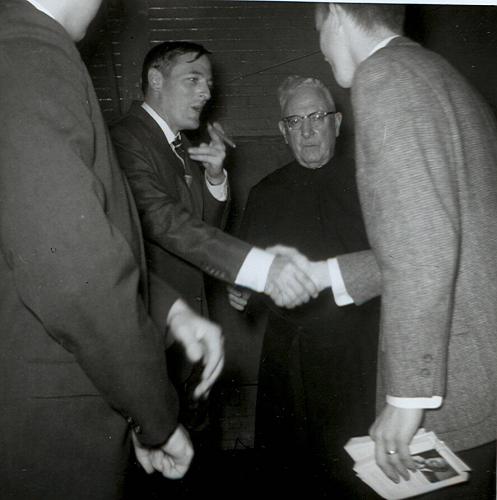 On a nice spring/summer day, we walked to the Rockville City Hall and I changed my registration from Republican to Independent. (And the rest, as they say, is history.)
P.S. Attached is a photo of yours truly meeting William F. Buckley Jr. at Gonzaga University in 1962.  Notice the priest is watching me suspiciously  -- even though I was a good conservative then, maybe the priest smelled a whiff of heresy?  (Priests seem to be good a finding heretics.)

You should have stayed, and fixed the GOP

As a young conservative (cofounder of the University of Idaho Chapter of Young Americans for Freedom), I thought we were fighting for freedom against the "commie-loving" Left.

instead we were fighting to become serfs to the likes of Trump and Mercer and Thiel.

Olga is a product of the commie Soviet system. The one we in the US were taught was an evil threat. Which, in some real ways, I think it was.

But growing up, they were taught all races are truly equal, that peace was the ultimate goal. She grew up a romantic and an idealist. And eventually, disillusioned with the reality of the Soviet system, the hypocrisy, the conflict between the ideals they taught compared to the way things actually were.

Yet she came through this and to this day remains a hopeful, romantic idealist. It is no small thing. Something of the original Soviet ideals are in her still, and shared with all she meets. To our great benefit.
Any system that produced Olga can't be all bad.
I believe there are powerful ideas and ideals in conservatism, and capitalism. But we too have contradictions embedded in our system, from the beginning. We don't really believe "all men are created equal". We never did. And even rights, like the pursuit of happiness, must be tempered by consideration of the common good. Common good. As in Commun-ism. We don't do that. We don't balance our right to pursue happiness against the rights of others. That's why in America, I can walk into McDonalds dressed like Rambo even if it scares the crap out of everyone.
The GOP has been drifting Trumpward for a long, long time. At least since Nixon's "Southern Strategy". What once may have been a compromise to capture southern racist votes, has snowballed into full fledged Nationalism and Fascism. Leaning left has risks too, but Trumpism may yet tear the place apart.

Three books will cure Olga of any lingering Soviet idealism:

And then there are the studies by Robert Conquest -- Stalin was a monster, worse than Hitler (if such is possible).
In conservative circles during the Cold War, the Soviet desire for "peace" meant that the West should just surrender and do what the commissars wanted.  (We good Conservatives were educated in how Communists misused language.

Being a Jew who escaped from the Soviet Union, Ayn Rand (Alisa Zinov'yevna Rosenbaum) realized that in practice there wasn't much difference between Communism and Nazism/Fascism so she lumped them together under the heading "collectivism".

You're confusing Communism with Stalinism, as most people do.

Communism need not and does not always lead to genocide. We have Amana and Amish communities right here in the US which are eminently communist and have not (yet) led to genocide.

And even if there is some correlation, that is hardly evidence of causation.

Don't get me wrong. I'm a small-d democrat. But communism and socialism have at their core the idea that you should care about other people. Capitalism does not. That's why capitalism can so quickly lead to slavery, or near slavery abuses like share cropping, and factory/mining towns where entire populations are kept intentionally and perpetually on the edge of poverty for the benefit of the few.

Chinese communism has lifted more people out of poverty than any system in the history of the planet. That too is data. American democracy has committed genocide, admittedly not on the scale of the monsters you mention. But to the affected populations, the scale was plenty monsterous. Think polio blankets. That too is data.

Black or white, any cat that catches mice is a good cat.

Me? I'm a compassionate nihilist. I care, I just have no idea why. And I don't know how to explain why everyone should.

https://www.insider.com/best-jokes-smart-people-what-they-mean-2017-8#2-two-sociologists-are-sitting-by-the-pool-one-turns-to-the-other-and-asks-have-you-read-marx-to-which-he-replies-yes-its-these-damn-wicker-chairs-2
2. Two sociologists are sitting by the pool. One turns to the other and asks, "Have you read Marx?" to which he replies, "Yes, it's these damn wicker chairs."
Here's why it's funny: Sociologists are likely well-acquainted with Karl Marx's theories about economics, politics, and society. But this joke isn't about Marx or his ideas, but about how wicker chairs tend to leave red indentations on your skin.
While the sociologist who asked the question meant, "Have you read Marx?" the other sociologist heard it as, "Have you red marks?"

First of all, a joke that needs explaining is not a joke.

I've red a lot of Ayn Rand. I was impressed in my twenties but re-read some more recently and have decided it's mainly garbage. Carefully thought through garbage but still garbage.
The stuff she's reacting to is no more about communism/socialism than life on a US southern slave plantation is about democracy & capitalism.

But she's a powerful and brilliant thinker. So I don't dismiss her lightly. I dismiss her with full force.

As one of my philosophy professors said, to be logically consistent in philosophy one has to be an extremist. Ayn Rand reads a lot better than Nietzsche (for example) -- or Marx.

Rand merely updated the Enlightenment focus on the Individual. With Rand, Hume, Russell, Ingersoll, Paine, and the Greeks as your guide you will succeed.

I've read some of Hume, Russell, Ingersoll, Paine. I find some use for them. But I still think Rand is garbage.
All the characters is her novels are one dimensional caricatures, unrealistic simplifications. As is her political philosophy. A caricature. Worse, a useless caricature.
Logical consistency is the hobgoblin of small minds. Logic is a powerful tool to get what you want, to get where you want. But it is utterly useless in the quest for figuring out what you want. The quest for logical consistency is, therefore, ultimately doomed.
Notice how I use logic to undermine the entire enterprise of using logic. Godel warned us of completeness.
Rand is absent compasion, except in a quite twisted and narrow way. And a world without compassion is not worth enduring.
"I regard compassion as proper only toward those who are innocent victims, but not toward those who are morally guilty. If one feels compassion for the victims of a concentration camp, one cannot feel it for the torturers. If one does feel compassion for the torturers, it is an act of moral treason toward the victims."
Playboy Interview: Ayn RandPlayboy, March, 1964
This is totally wrong. Experimental psychology demonstrats convincingly the line between torturer and victim is all but arbitrary. Under the right circumstances, nearly everyone becomes torturer. Or victim.
Compassion only for victims is quite trivial. Of course we feel sorry for the suffering. Obviously, and rightly so. But it is a narrow and small sort of compassion. In some sense, this makes me a 'love thy enemy, turn the other cheek' Christian. I never believed he was the divine son of God. I'm not entirely convinced there even was an historical Jesus. But not all his ideas are without merit. And his form of compassion is far, far better than the small, narrow one of Rand.
I admit it presents a moral quandary. I condem the torturers, but compassion compels me not to become one by torturing them myself. This is no moral treason towards the victims, though in their pain and anguish they may well see it that way.
I don't have answers. I barely grasp a few of the questions. But Rand, I can toss aside.

Ayn Rand said that the one thing that should be banned from human interactions is "force".  By that reasoning, the torturer should be condemned.

I didn't say the torturer shouldn't be condemned. He should. Obviously. But I still say: to torture the torturer makes us torturers too. I condem him, and take all due measures to stop him, even up to taking his life if that's the only option.

There's a scene in 'To Kill A Mockingbird" where Atticus Finch shoots a rabid dog. The rabid dog is the would be torturer so to speak, made so because he's ill. To my mind anyone we might call 'torturer' is by definition ill, sick. Maybe it's an obvious illness like rabies. Maybe it's an infectious meme like patriotism or religion. But any torturer, even those convinced they are doing it for some greater good, has by definition lost sight of what's really important.

The fact he's sick in no way lessens the public threat represented by the rabid dog. So, we have no choice but to stop him, take him out. Atticus does the job because he's just one of those people who, with some reluctance, takes on the tough jobs others can't or won't. He shoots the dog. One shot. No joy at all. He takes a life, and takes the responsibility seriously. But he does it.

This is a kind of compassion. Yes, even a torturer in waiting should get some compassion. Take them out if you must, but quickly and painlessly as possible.

Harper Lee captures more about morality and social justice in that one scene, in her only novel, than Rand captured all her cerebral, prolific output. Because Lee understands compassion in a way Rand doesn't. Or maybe can't.

Force. And Rand obviously knew this.  All government, all society, is ultimately based on an agreement (sometimes coerced) about who can use force. Words can't ban force, unless ultimately backed up BY force. I see no way around that. At least now and then, an Atticus Finch with a rifle is a necessity we much concede.

The scene is beautifully filmed, but reads even better than in the movie

I try never to write more clearly than I am able to think.