Correlation between believe in evolution and concern over the environment.

It seems that people who believe in evolution are more likely to favor environmental legislation than those who don't: 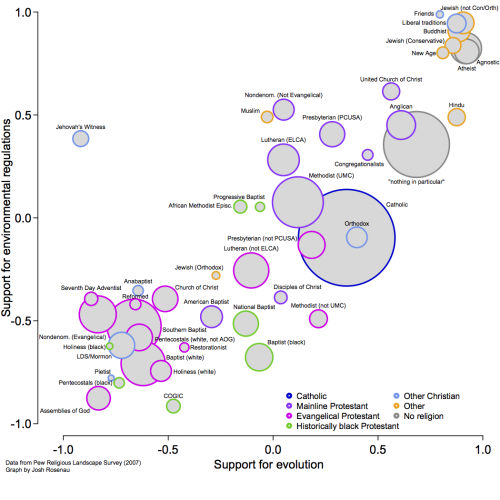 Where do babies go if they die before being baptized? Catholics used to say "limbo", a place neither heaven nor hell. A new Catholic study group now says "there are good reasons to hope" such babies go heaven.

That's right: limbo be gone! No more limbo. Well, the study goes out of their way to say they aren't sure. But limbo, it seems, was just a hypothesis all along.

Overall, I have to agree. There are indeed good reasons to HOPE babies go to heaven. I HOPE I go to heaven too. There just aren't any reasons to believe it EXCEPT hope.

I don't know if this is actually religion or humor. Both, I suppose.

It seems artist Cosimo Cavallero has created a 200 pound sculpture of Jesus Christ made entirely out of chocolate. Did I mention the sculpure is anatomically correct? And nude?

A 21 year old Indian man has been charged with fraud for trying to cash a $50,000 check from God. So much for "In God We Trust". Even God, it seems, must settle his debts in cash.

Polygamist 'protected by God'. Turns out, not so much.

Warren Steed Jeffs (50), on the FBI most wanted list for arranging marriages between old men and underage girls (not to mention the 40 odd wives of his own).

He reportedly told his lieutenants 'he was invincible, protected by God from capture'. Turns out, not so much as he has just been arrested for a minor traffic stop north of Las Vegas. Utah and Arizona are filing charges on the arranged marriages (and rape 'as an accomplice', whatever that is).

He is said to have at least 40 wives and heads a church of nearly 10,000. He lied to the police about his name and tried to use a contact lens receipt as an ID.

ATHEIST FOUND NOT GUILTY ON ALL COUNTS

In Oklahoma a 15 year old girl was kicked off her basketball team for refusing to pray with the team. When the athiest family inquired into what had happened they were met with lies, threats, violence and legal charges stemming from an altercation between the father and the girl's principal.

Some propsective jurors did not know what an athiest was. Others admitted they could not believe an athiest over a Christian. Such jurors were dismissed, but eventually 12 jurors were selected and a verdict favorable to the athiest was rendered.

If, for some reason your life functions ceased, my most precious one, I would collapse, I would draw the shades and I would live in the dark. I would never get out of my slar pad or clean myself. My fluids would coagulate, my cone would shrivel, and I would die, miserable and lonely. The stench would be great.