Moore has a definite point of view and usually makes some points that catch my attention.  I'll pull two quotes from this interview.

First, Moore suggests things in the US started getting difficult "around the time of Ronald Reagan."  Here's one piece of supporting evidence.  A 2005 UCLA study titled "Income and Wealth Concentration in Switzerland over the 20th Century" includes this figure illustrating that around the time of Ronald Reagan the share of income of the top 0.1% income earners in the US more than tripled. The very rich suddenly got very richer: 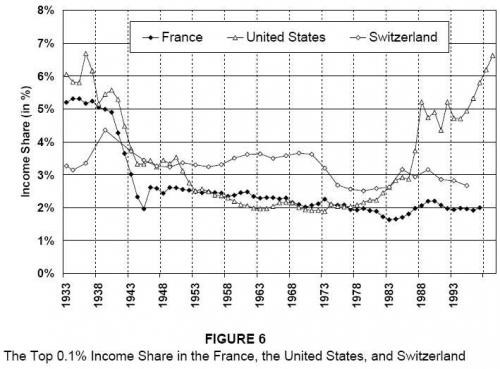 A second statement by Moore also caught my attention.  He said "the wealthiest 1% has more financial wealth than the bottom 95%."  A 2005 study by the Federal Reserve Bank of Chicago titled "Wealth inequality: data and models" has a Table which address this point (Tables 1, p. 7).  I've rewritten the table to compare to Moore's statement:

Still, he's just about right.  The rich are really very, very rich compared to everyone else.  And since the 1980s, they've been getting richer.  Let them eat cake.

Wit has truth in it; wisecracking is simply calisthenics with words.